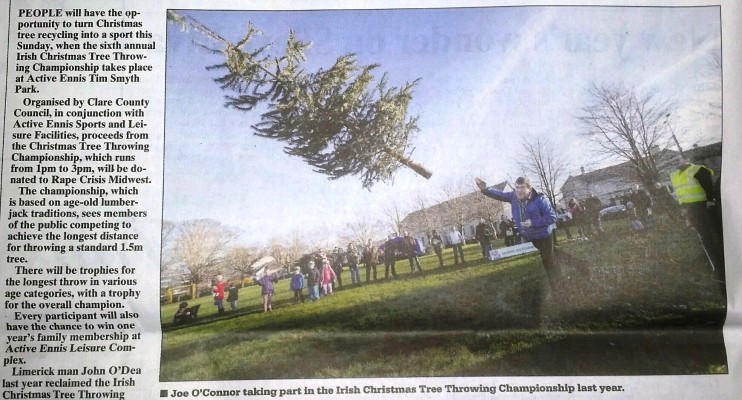 Members of the public are being invited to break a unique Guinness World Record as well as drop off their Christmas tree for recycling on Sunday 8 January 2017 from 1.00 p.m. to 3.00 p.m. when the 6th annual Irish Christmas Tree Throwing Championship takes place at Active Ennis Tim Smyth Park.

Organised by Clare County Council in conjunction with Active Ennis Sports and Leisure Facilities, the sixth annual event is a novel way to turn Christmas tree recycling into a sport, while at the same time raise funds for a needy cause with this year’s proceeds going to Rape Crisis Midwest.

The Championship, which is based on age-old lumberjack traditions, sees members of the public competing to achieve the longest distance for throwing a standard 1.5 metre tree.  There will be trophies for the longest throw in various age categories with a trophy for the overall champion.  Every participant will also be entered into a draw to win one year family membership at Active Ennis Leisure Complex.

Tim Forde, General Manager, Active Ennis Sports and Leisure Facilities described the Championship as “a sporting charity event with competitors from the four corners of Ireland and further afield being invited to take part. The event is open to men, women and children, and each contestant will be afforded three attempts at throwing the Christmas tree.”

“Disposing of the Christmas tree is often an arduous task for many so this event allows people to do so in style and with relative ease,” stated Karen Foley, Environmental Awareness Officer for Clare County Council.

“Clare County Council will be providing a free Christmas tree recycling service at various locations throughout Clare, but we would welcome anyone who wishes to drop their tree at the contest and make a donation to Rape Crisis Midwest. We will also arrange for the tree to be mulched for use by the Local Authority’s gardening section,” stated Ms. Foley.